The TERRANISME by LAVille & Co.

The 9th World Urban Forum was held in Kuala Lumpur 6-13/02/2018, where LAVille & Co exhibited. It was a turning point for the TERRANISME. The stand attracted many visitors who wants to have deeper insights of what the Terranisme is. They understood the Terranisme, might hold the key for the future of land management, in order to find once again compatibility between Earth biosphere and human activities, such as it was before the industrial era, but with a population growing to 11 billion in 2100.

The Terranisme respects the crucial equilibrium between Economy, Society and Environment. It provides a land management guide, which prefigures the cities of tomorrow in conjunction with their inseparable agriculture and forest terrains, and it CAN BE ADAPTED anywhere in the world.

In the concept of Terranisme, the Urban Area is bordered with transports along with agriculture on one side and forest on the other side. The forest compensates the carbon generated by human activities and preserves species. The local agriculture provide food to nearby citizens. Agriculture and forest surfaces are calculated in accordance with the corresponding segment population of the Urban Area.

The Urban Area develops linearly, joining one existing city to another. It forms a closed loop as much as possible. With time, this leads to a cellular pattern where natural ressources are inside the loop and the forest outside. My researches show that such design could be considered for an optimal cell hosting 3 million people when the loop is closed, with an objective of 80% local food autonomy and 70% carbon compensation. The loop design, the 2km wide pedestrian Urban Area, the proximity of agriculture, play a great role in the reduction of carbon emission.

PWR areas are situated on the inner side of the Urban Area (see image):

-Power is coming from 4 main sources of renewable energies: solar, wind, biogas, and biofuel. All of them combined and properly managed can avoid massive electricity storage in batteries. The electricity network built as a grid, enables regulation between urban area sub-part.

-Water: From a river input, the main distribution can be conducted all along the Urban Area, be stored and treated all year long. Overflows are an opportunity for storage, and water can be later reintroduced in the ground during the dry season. Irrigation is made easier for agriculture when the loop is closed forming an entier cell. The Urban Area acts like a sponge city, in order to fill the groundwaters all year long. Using a local treatment of water in the building undergrounds, the sewage network can be suppressed. Once cleaned, water can be re-injected into the ground. To let water drain in the ground and to keep it locally is a major contribution to the fight against dryness.

-Materials: The biggest part of the material we use today can be dismounted, and cleaned for reuse. In the PWR area, vast parks are established, to sort and to stockpile all material coming from the urban area. All the organics, to serve as biogas for the heating of buildings and all plastics, that can be recycled for 3D printing, can stay within the Urban Area.

Cars and trucks are kept outside the Urban Area, along with the public transports. Modern carts, that can be electrically aided help to transfer goods from the outer to the inner of the urban area. Free of cars, citizen can enjoy breathable air once again.

The city diversity plays a great role in the Terranisme. The density of buildings, shops, services, administration, education institution, health institution, industry, companies, offices must be spread regularly all along the Urban Area. It is the most efficient way for reducing the distances that people must endure nowadays in their daily lives and to reduce carbon emission accordingly.

It can be observed that local agriculture, water management, power production, material recycling provides jobs, and the added value to start a local economy. The objective is to reach some local autonomy, social stability and a great reduction in daly life stress.
LAVille & Co, creator of the discipline, is here to help you to adapt and implement the TERRANISME in any place of the world. 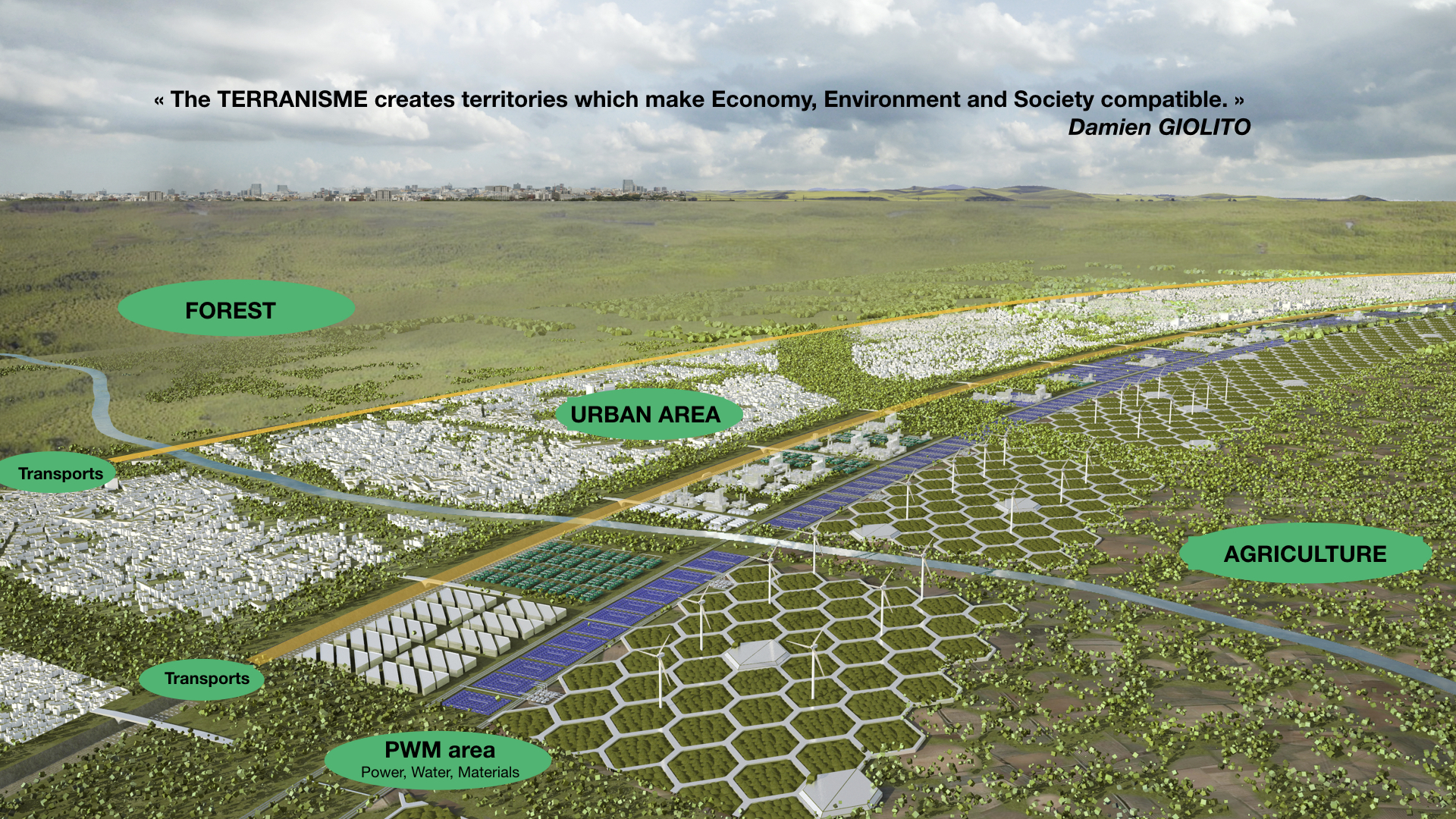 The TERRANISME by LAVille & Co.